Lost and Found again – the return of the prodigal bike 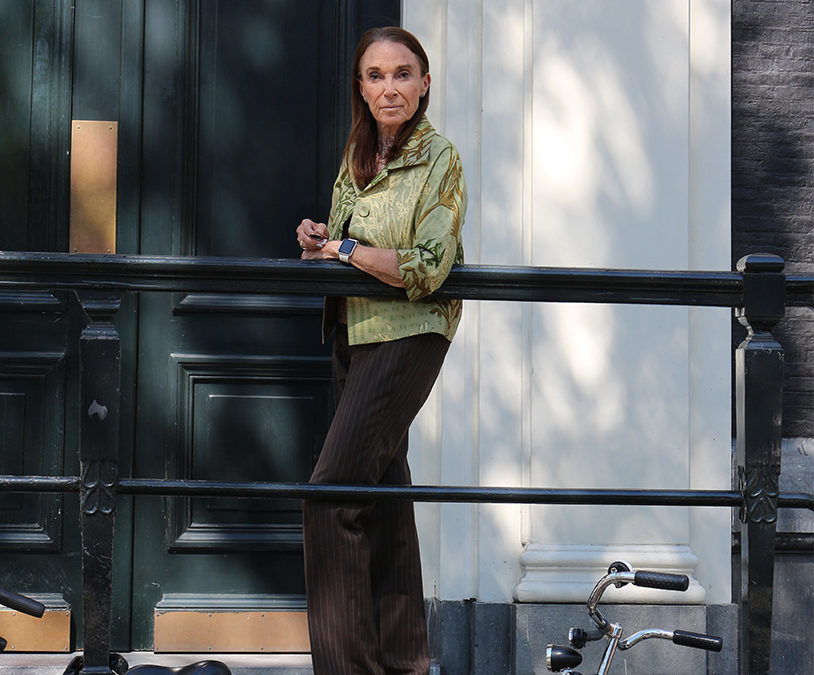 I often think that the angels are always looking after me, but I don’t always have proof. Sometimes life is so graphic that it is uncanny.  Yesterday was one of those days, and today I am a big believer in perpetual guidance as their benevolent caretaking is undeniable.My living room was filled with magnificent bright slanted winter light. As I made my way across the room, I pulled the curtains on both my big canal windows, as I always do in the morning.  Sleepy Amsterdam was alive and well and I was slowly joining the ranks of early risers. It was 7:00.  I took a small pause at the north window and sat down on the cozy bench to review the day. I noticed that all the diagonal parking places were empty. Thinking that the house boat across the street was possibly under construction,  I assumed that the road had been blocked to traffic for the day~ not uncommon to Amsterdam center activities.  There is always someone moving house, so roads are closed to traffic all the time; after all, the missing cars were not so alarming and rather easy to explain. I puttered around the kitchen emptying the dishwasher, poured myself a second mango juice and mindfully made my way back to the cozy bench. When the phone rang, I retrieved it in the hall  and made a spontaneous choice for a quick shower. Reviewing my day, I chose to skip the gym and have a luxurious start doing morning rituals. After my shower, I consciously picked up my phone and rapidly returned to my perch by the window for another look at my canal…  for the third time I slid into my seat, only to see two men holding my bike. A giant pair of scissors had removed the lock and they were carrying the bike away to a nearby truck.In just a few seconds,  I put on my gold sneakers and ran down three flights of stairs into the street.  Wow, I  thought, what are the chances of this happening? The Amsterdam Municipal truck and three strong guys were divesting the street of all bikes, and I was watching them confiscating my trusty Batavus.I had a sudden flashback of 5 years ago, when I mindlessly left my keys in the bike and it was stolen – that same bike that was returned to me by the Amsterdam police after one year!  After its return, the prodigal bike had been my chariot ever since. So here we were again, on the brink of another incident.When I got to the street, the guys were standing there checking out their work. I approached them and said:

“ I saw you take my bike away, you removed the lock, cut off a link and took it from the bike rack. It was the turquoise one on the end. “

“This one?”  He pointed to the one on the truck.

“Yes, that’s the one… may I have it back?”, I asked nervously like a small child.

” Sure,”  he said and ran up the ramp. He grabbed the bike and quickly stepped down the slanted ramp with my aqua Batavus. “Here you go… didn’t you see the giant yellow signs?” He inquired.“No, I did not notice”, I confessed  uneasily.“The sign has been there for three days!”“ Perhaps, I should pay more attention”“We are doing some work on the lights and need to get acces to the entire canal bank. Sorry for any inconvenience”. “ I am so pleased with your response and courtesy, I would like to take a photo with you, may I? This is a story with a great ending for me and cause for celebration. You see, in 2015 I lost the very same bike for one year. The Amsterdam police found it and one year later we were reunited… I consider this miracle material and proof that miracles do happen. What are the chances of me looking out of my window at the exact moment that you were confiscating my bike ~ and in time for me to run down and claim ownership  ~ and you would grant me the opportunity of having it back with no consequences? So I want to say thank you for doing your job and considering the possibility of human error, I should have read the sign!”I took myself out for breakfast at the Brasserie Baton and bought a big bouquet of lilies to celebrate the return of the prodigal bicycle.